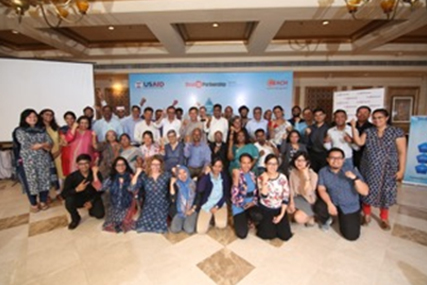 Organized by REACH, in partnership with the U.S. Agency for International Development (USAID) and the Geneva-based Stop TB Partnership, the four-day workshop brought together 32 people from six countries who shared personal experiences on TB, documented the societal and systemic barriers they faced, transformed the barriers they faced into concrete advocacy goals and strategies and discussed the power of collective community-driven advocacy to change the status quo in TB.

“The voice of the survivor becomes the voice of India. In TB, there is a dual stigma – one is the disease itself but the other is poverty. This dual stigma can be explained best by the TB survivors. The TB fight is not finished – but survivors will help us get there. TB survivors at different levels can be great ambassadors and pass the message very efficiently so that TB loses, and we all win,” said Dr Sunil D Khaparde, Deputy Director General, TB, Central TB Division, Ministry of Health and Family Welfare, Government of India, who was the chief guest at the valedictory session.

Speaking at the valedictory session, Xerses Sidhwa, Director of Health at USAID/India, said: “USAID is proud to support this workshop, which helps TB survivors to become powerful agents of change in India and other regional countries. It is critical that we actively engage TB champions in designing and implementing programs and advocating for policy change. Their experiences can guide the way forward as we move toward a TB-free India and world.”

Dr. Nalini Krishnan, Director, REACH, added: “At the core of our work is ensuring that those affected by TB are an integral part of all efforts, extending beyond tokenism. This capacity-building workshop is an important step to achieving a long-term role for trained, committed advocates in policy advocacy, overseeing program and program implementation.”

The workshop addressed issues such as the science and burden of TB, and focused on the need for powerful and effective storytelling. “I lost my father to TB. And a few years ago, I was diagnosed with TB as well and I could never speak about it. It’s a huge burden to suffer alone. That is why this workshop just clicked for me. People wanted to listen to our stories, and I have learnt how to tell my story even better,” said Arun Singh Rana, a TB survivor from India, at the closing ceremony. Another TB Champion, Cherry Florida from the Philippines, said, “I would like to honour REACH for bringing us all together to hear everyone’s stories, it’s really encouraging to come together like this on an international level. This workshop really changed my perspective and helped me look at the broader picture.”

Speaking during the workshop, Blessina Kumar, CEO (I), Global Coalition of TB Activists, one of the lead facilitators for the workshop, said, “The energy brought in by the TB Champions who won the fight against MDR, XDR TB and just TB was palpable. The TB response across the world is missing passion and if we want to End TB in our lifetime, we need their lived experiences, their passion and their energy to bend the curve and win the battle.”

Globally and in South-East Asia, the TB crisis demands a comprehensive response from both government and non-government actors, including the private healthcare sector, business leaders, civil society and most of all, those directly affected by TB—patients, survivors and their families. However, responses to TB have remained top-down and TB survivors, patients and their families have had little or no role to play in the fight against the disease.

“If we are serious about ending TB, engaging those who have experienced TB first hand in a meaningful way is critical,” said Dr Lucica Ditiu, Executive Director, Stop TB Partnership. “The Stop TB Partnership is therefore delighted to partner with REACH to support the desire of TB Survivors from the South East Asia region to further build their skills to become even more powerful TB advocates and we look forward to continuing our collaborations with other community and civil society partners in the region such as the newly established Asia-Pacific Activists’ Coalition on TB (ACT Asia Pacific) and the regional arm of the Global Coalition of TB Activists (GCTA),” she added.

The workshop was organized by REACH in partnership with USAID and the Stop TB Partnership. With support from USAID, REACH is implementing the TB Call to Action project in India, which seeks to strengthen USAID’s efforts to end TB in India by advocating for policies and programs that empower patients, caregivers and communities.